The undefeated Windermere Prep football team is — once again — an offensive juggernaut, averaging 43.7 points per game so far this fall.

The well-oiled, high-powered machine that is the Windermere Prep offense has its roots in Lexington, Kentucky.

That’s where, as the star quarterback at Lexington Catholic High School, Jacob Doss learned the spread — breaking some records along the way.

It’s a system in which he developed even further as a college quarterback at the University of Wyoming.

Now, as the head coach of the Lakers’ football program — the only coach the program has ever known — Doss has spent nearly eight seasons as a chemist of sorts, taking the base of the spread offense and adding wrinkles to suit the roster he has each fall.

The product of his ongoing experiment has been an offense that has averaged 43.7 points per game during the past four seasons, dating back to the Lakers’ Sunshine State Athletic Conference Championship in 2014.

At times, it seems the Windermere Prep offense can — and will— chug on despite whoever suits up for the Lakers.

“We do change (the specifics of the offense), but the overall philosophy is that I like to change tempo as much as possible,” Doss said.

Changing the tempo means that the high-flying passing attack the Lakers are most known for, an attack that might take the team down the field in four plays, always has been anchored by potent rushing attack that can just as soon key a 12-play drive.

Over the years, changing the tempo also has meant that opposing defenses have at least had some say in the manner in which they allow 40-plus points.

“Teams have to gamble; they have to make a decision,” Doss said. “Do they try and stop the run or try and stop the pass? And as soon as we figure that out and see that, we try and combat that. … If you start unpacking the box to stop (our receivers), then we’ve got a senior veteran running back.”

This season, the latest iteration of the Windermere Prep offense has manifested itself to the tune of 43.7 points per game. It is the first year that Olympia transfer Khadry Jackson has been a part of the program, and the junior receiver is enjoying the system.

“Offense is all about timing — when you have timing down, everything runs smoothly,” Jackson said. “It’s fun because we put a lot of points on the board — it’s a real fun system to play in.”

What the Lakers have done so far this fall may be the program’s most impressive feat yet, simply because of the adversity weather has posed. While all football teams in Florida have had to deal with Irma-related headaches, Windermere Prep’s issues started earlier, with a storm ending their Kickoff Classic after just four plays from scrimmage and weather again canceling their Week One game against St. Stephen’s Episcopal.

Despite that, the Lakers haven’t missed a beat, and running back Ismael Cortes says it is because of work done when there isn’t a crowd in the stands.

“Practice — Coach Doss doesn’t let us go one play (with a mistake),” Cortes said. “If a little step is wrong, we’ll redo the whole play over again.”

Doss has an affinity for quarterbacks, given he played the position, and one of results of that is that he runs an offense where the quarterback has a lot of freedom to create. With the run-pass options (RPOs for short) that Windermere Prep utilizes on nearly every offensive snap, quarterback Kai Patterson is given more discretion than the average varsity quarterback.

“I know (Coach Jacob Doss) has a lot of confidence in me — that’s why he puts a lot on my plate,” Patterson said.

Many high-school football programs run some variation of the spread and RPOs, with varying degrees of success.

One reason Doss believes the Lakers have had so much success is that, by virtue of the education his athletes get at the elite prep school, he has a team full of intelligent players.

“We take a lot of pride in these kids being smart,” Doss said, adding that senior center Will Sealy is in contention to be the school’s valedictorian. “We’re able to put a lot on these kids.”

For the kids, the end-game is a win-win: the Lakers have fun putting up plenty of points each week, and for a team of playmakers who would like to continue their careers on Saturdays in college, they are equipped to step right into many collegiate systems.

“Colleges that know offense will come in here and recognize that what I’m running is a college-level offense,” Patterson said. 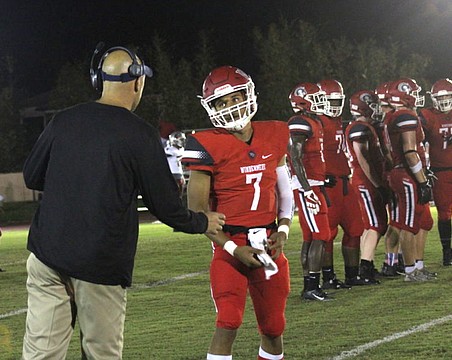 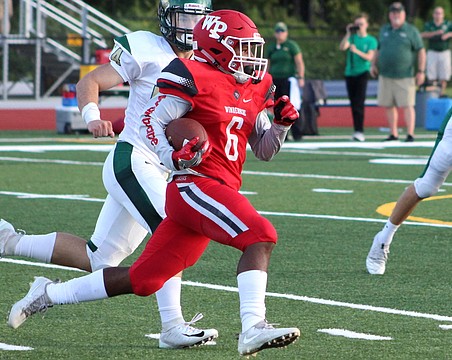 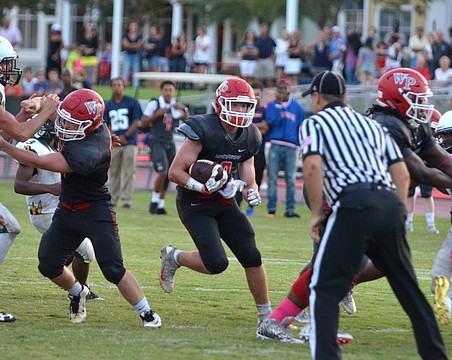 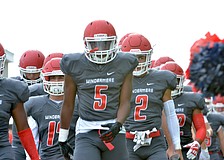 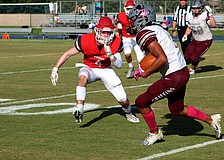 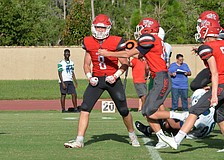 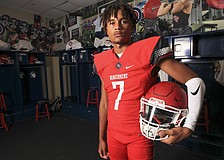 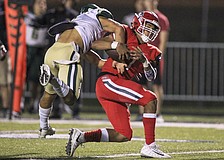