CFCA has raced out to a 2-0 record to start their season. It’s uncharted territory for the Eagles.

The 2-0 Eagles have dedicated their 2022 season to coach Alain Noel, who died unexpectedly. Courtesy photo.

The 2-0 Eagles have dedicated their 2022 season to coach Alain Noel, who died unexpectedly. Courtesy photo.

The CFCA Eagles implement lessons they learn in football in their lives outside of the game, as well. Courtesy photo.

The CFCA Eagles implement lessons they learn in football in their lives outside of the game, as well. Courtesy photo.

CFCA players have been using the acronym "LLCA," meaning Long Live Coach Alain, on their shirts during the games. Courtesy photo.

CFCA players have been using the acronym "LLCA," meaning Long Live Coach Alain, on their shirts during the games. Courtesy photo.

The Central Florida Christian Academy football team has won its first two games of the season — the other two have been canceled and postponed, respectively.

“Since I’ve been here, we’ve always lost Week One — our first game of the season — every season I’ve been here,” head football coach Jeremy Campbell said. “I guess you can say this is unprecedented or uncharted territory being 2-0. It doesn’t sound like a lot, but for us, we’ve always started slow out of the gate, so that’s one thing I challenged this group in the beginning, it was to start fast. To be honest, I think the cancellation of the Kickoff Classic because of weather lit a fire in them to play with a sense of urgency and not take games for granted.”

Campbell has been leading the Eagles for the last five years. However, this year, he and his coaching staff changed the way they run practices.

Offensively, the teams motto is “Do What We Do.”

“We take what the defense gives us,” Campbell said. “Our guys out front have played really well against multiple looks, defensively. So, I think that they are in a really good place to try to tune some things from a personal standpoint and from a play standpoint, as well.”

When it comes to defense, Campbell said the team is anchored by its aggressive D-line.

Culturally, the Eagles function like a family — not one player is bigger than the entire team.

“Families: They fight one another and they argue,” Campbell said. “But at the end of the day, family is family, and we have each other’s backs. I think that that, from a standpoint of the football field is great. But (it trickles) into the classroom and into the hallways, as well, which makes it easier for me at my role as administrator here at the school to see those kids kind of embrace everyone and not just people who look like them or dress like them.”

Receiver and senior Lavon Hudson, 17, and defensive back and senior Justin Preaster, 17, are examples of family within the team.

“I’ve really grown because of him,” Hudson said of Preaster. “He pushed me to work hard.”

For Preaster, leadership within the team comes by leading by example.

“In (one of our practices), we had a corner who messed up on a play; I made him better on the next play,” he said. “I got him right for the play, and he executed it. I showed him the pros and cons.”

The Eagles are big on communication and teamwork, and the coaching staff works hard every day to make sure the players know that those skills not only apply to football but also life.

“Football is a game that teaches you life lessons every day,” Campbell said. “Things like teamwork and commitment and communication skills that they are going to need on a daily basis — whether they play this game or not. So for us, we just continue to remind them of those things and use our experience as a staff to continue to pour into them, so they don’t make the same mistakes we made as young men.”

Every coach on the CFCA football team is able to provide different perspectives to improve the team’s play style on a constant basis.

The offensive coaches try to implement new things they learn from watching college games on Saturdays, taking a very meticulous and methodical approach as to how they bring those methods into practice. On the defensive side of the ball, the team has been improving on its technical skills.

A big tool in the team’s success has been having Lo Wood and Excel Speed working on campus. That has allowed the Eagles to participate in events such as the QB Shootout and the Battle of the Pit, from which they are able to absorb knowledge from many different coaches with a lot of years of experience.

The team has had a couple of difficult hurdles to overcome this year. The passing of assistant coach Alain Noel still weighs heavy on the players and the coaches so much so, that some of them have been wearing long sleeves shirts under their uniform with the acronym “LLCA” meaning “Long Live Coach Alain.”

“That’s who we are doing it for,” Hudson said. “Can’t do (anything) else but play football for him.”

Another challenge the Eagles have faced is one of their defense coaches, Terry Freeman, has been on a mission trip to South Africa for about three weeks.

“We have been a man down from a coaching point of things, but he’s done some great things over there, and when he gets back, we’ll all be better for it,” Campbell said.

To sustain their undefeated record, the Eagles always remain focused on the next play — no matter what happened on the previous one.

“They really exceeded what I thought in the beginning,” Campbell said. “So now, we are just taking it game by game — the next game is our biggest, because it is our next, and we are expecting some really good things from this group, and that the leadership that we have will continue to push us in that direction. The sky is the limit, I tell them that all the time, and we can be as good as we are on any given Friday or Thursday.” 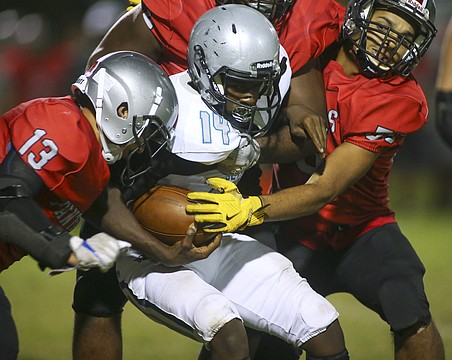 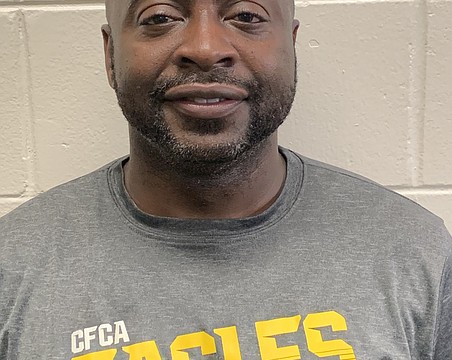 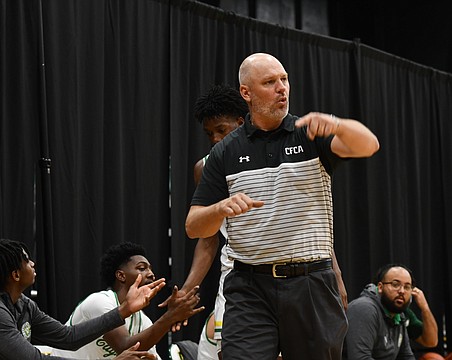 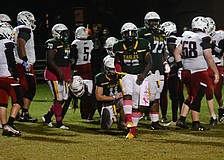 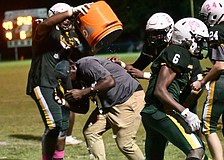 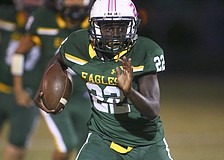 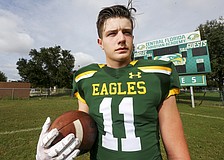 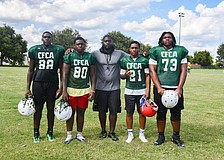