Allen family: “Around her, the air was always sweeter, the laughter more musical, the adventures spiced with greater possibility and the embrace of loving arms ever wider.”

Rollie Allen was known for her effervescent personality.

Rollie Allen was known for her effervescent personality.

Rollie Allen as a young woman.

Rollie Allen as a young woman.

Rollie Allen and her horse, Dusty.

Rollie Allen and her horse, Dusty.

Rollie and Bob Allen glanced at a future site map for Walt Disney World during construction in 1970.

Rollie and Bob Allen glanced at a future site map for Walt Disney World during construction in 1970.

The Allen family gathered for a photo at the Bob Allen Park at Edgewood Children’s Ranch after a recent renovation.

The Allen family gathered for a photo at the Bob Allen Park at Edgewood Children’s Ranch after a recent renovation.

She was known as Bob Allen’s wife in the earliest Disney circles; Rollie Rae to her friends; and Mom and Memo to her three sons, grandchildren and hundreds of other children who were privileged to be part of her life. Windermere resident Rollie Allen — who has been described as joyful, engaged, passionate, creative and an “adorable firecracker” — died Saturday, Jan. 7, 2023. She was 89.

Rollie Allen had lived in Windermere since 1971, when she and her husband moved from California to Florida when Walt Disney World opened.

She cherished her role as the wife of the former Disney vice president, who died at the age of 55 in 1987, but Allen blazed her own trail and put her own name on many local boards and affiliations.

She served on the Mercury 7 Foundation, which is now the Astronaut Scholarship Foundation; she also was on the board of directors for Edgewood Children’s Ranch; and she was passionate about volunteering at Shepherd’s Hope. But perhaps her biggest and proudest legacy was her decades of service as president of the Bob Allen Family Foundation, which raised funds in support of local outreach.

Rollie Rae Morgan Allen was born to Roy O. and Shirley I. Morgan on May 30, 1933, in Corona, California.

She met the love of her life, Robert C. Allen, in the sixth grade and the two formed a friendship and love that lasted until his death in 1987.

“Her married life was a lot about keeping his oars in the water,” son Bob Allen said. “She ran the house and made sure we were all squared away.”

Her family described her as a loving and playful person.

“She was one of our favorite playmates,” her son Bob Allen said. “She was very playful and very engaged. She loved to laugh, had a great sense of humor. She wasn’t honestly the best joke teller; she always blew the joke, which made it very funny.”

She was creative, he said, and later in life she began to paint. She played piano and had a lovely singing voice, he said.

“We were very close,” her son said. “My brother lives a few blocks away, and I live a few miles away. During Covid, you’re grounded, so we went over every day and hung out on her porch and had a glass of wine. When Covid was winding down, we decided there was no reason to stop it now.”

Rollie Allen had a personality that drew people in, and her children’s friends liked hanging out at the Allen house.

“Our parents were the cool parents,” Bob Allen said. “Everyone has a nickname for their mom growing up, and it was Memo. Her grandkids call her Memo, and hundreds of people called her Memo. A friend said the other day, ‘She was everyone’s Memo.’ We all really embraced that.”

Rollie Allen enjoyed her various friend groups, including the Red Hat Society and her YMCA workout group. She was a member of St. Luke’s United Methodist Church in Orlando.

Longtime family friend Jacob Stuart enjoyed a community relationship with the Allens. He met Rollie through her husband when Stuart served as chief of staff to former Orlando Mayor Bill Frederick.

“That led to the opportunity that I got to meet Mrs. Allen, never dreaming that I would one day be honored to be in her home and on a first-name basis,” Stuart said.

“She’s a 360-degree woman,” he said. “She was gracious, she was generous, and she was very gifted, and my life and the lives in our communities have been enriched by her life. And, she (was) very special. … She just made me feel special every time I was around her. And she had that beautiful smile, and I always got a warm and wonderful greeting that I’ll never forget. And that’s the gift that she gave to me and in a sense the gift she gave to our entire community.

“She started the Bob Allen Family Foundation in honor of Bob, but … she’s touched lives of people she’s never met and in such a wonderful way. … People who didn’t know Mrs. Allen need to know about Mrs. Allen. … Mrs. Allen is one of the most wonderful people that I’ve ever had in my life.”

One of Rollie Allen’s closest friends was Jackie Sullivan. The two met as Disneyland spouses in the mid-1960s, and their friendship flourished and continued when the families moved to Central Florida less than a decade later. They lived on the same Windermere street for more than 40 years.

Allen and Sullivan took their families on vacations together to the rustic Huntington Lake, where they fished for their own food and turned up their noses at the shower facilities, Sullivan said.

“We loved the vacations, but they weren’t (fancy),” she said. “And then we would come back to Disneyland and enjoy the nice treatment.”

They shared books and parenting tips and called themselves sisters. They shopped, played tennis and sipped wine together.

“She was very loving,” Sullivan said. “We had a special relationship. … She was lots of fun. She had a very pleasant personality. … I treasured her friendship.”

The Allen family shared this on Facebook: “Woven into the fabric of the world, there are beings of moment. Call them magical, or blessed, they are the ones around whom the air is sweeter, the laughter more musical, the adventures spiced with greater possibility and the embrace of loving arms ever wider. They are the ones who say ‘Yes, Let’s do it!’ and ‘Isn’t that wonderful’ or ‘How can I help you?’ as they gently direct our attention to a color it is important to notice or a side road to explore. We know them when we encounter them and when we are wise, keep them close because they make us and all of what we think, say and do better in our hearts and across universal scales. One of these is Rollie Rae Morgan Allen. … Look for her in a painting she made, in a one-liner that cracked you up and anywhere there is a bird, a flower, a well-told tale or a tuneful ballad.”

In addition to her three sons, Allen is survived by her daughters-in-law, CT and Pam; and her grandchildren, Robby Libby and Olivia Rae. 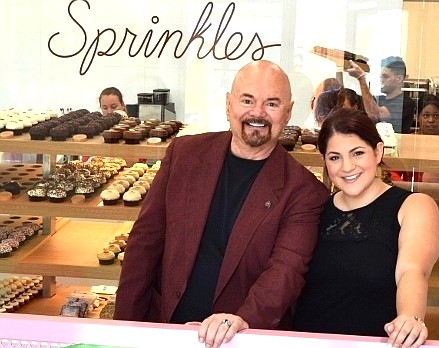 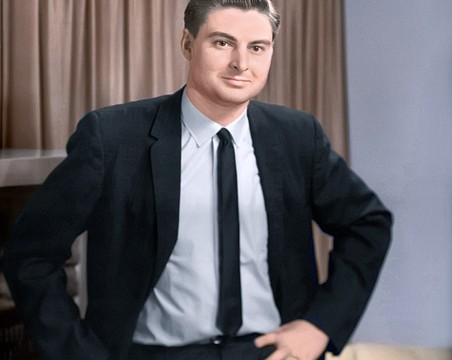 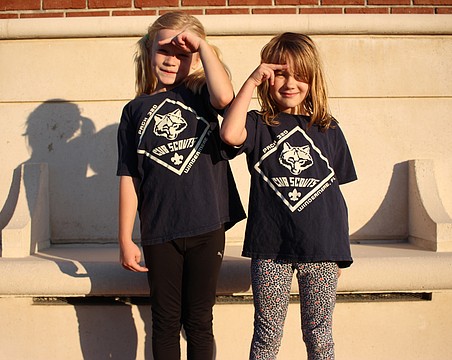 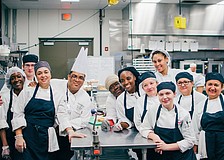 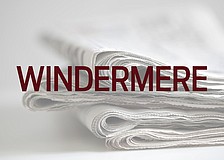 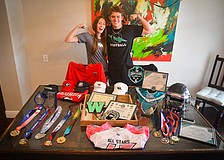 POWER COUPLE: Ana Bleeker and Kevin Sullivan earned several athletic and academic awards, one of them being 'Athlete of the Year' simultaneously 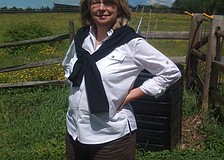 Volunteer recognized for years of service to Windermere 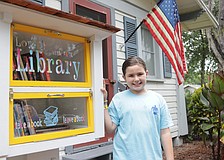