Art of Fitness and Elite Animation held the art and fitness workshop on Sunday, April 23

Soothing music filled the room as the yoga instructor slowly guided her students into a new pose. The class might have appeared like any other yoga class if it weren’t for the people sketching on notepads on either side of the room.

The event was the first of its kind at Art of Fitness, a personal training studio in Dr. Phillips, thanks to the collaboration between the gym’s owner, Ron Betta, and Elite Animation cofounders Todd and Gladys West.

“It’s the art of fitness combined with the art of drawing,” Gladys said.

Having previously worked with Gladys at Disney, Betta approached Elite Animation several weeks ago with the idea that the two partner together to combine yoga, tai chi and a drawing class.

“My idea was how do we get more involvement between businesses,” Betta said. “I knew the owners of Elite Animation, and I asked if they could bring their students into our studio while we took yoga and tai chi.”

For Betta, art has always been part of his fitness studio, from his training philosophy to the artwork hanging on the walls.

“I look at the clients I train as a work of art,” Betta said.

When creating this new class, Betta said he considered inviting the Elite Animation students to draw during personal training sessions, but decided against it.

“You have to have a group of people who are aware they’re going to be drawn,” he said.

In order to ensure the clients were comfortable with the event, Betta created a special yoga and tai chi session for Sunday, April 23, and several of his clients signed up to participate in the classes.

The afternoon kicked off with a hour-long session of yoga. While yoga classes typically move quickly from one pose to the next, the class was re-adjusted to allowed the Elite Animation students time to sketch each pose.

“It was really interesting because holding poses is not easy,” said Meilyn Paz, one of the yoga participants. “It was a little different from a regular yoga class, but it was good stretching. And you’re helping someone (by holding the pose), so it was fun.”

After the yoga session ended, a tai chi class began.

“It gives artists a chance to sketch the body in different positions,” Betta said about why he choose a yoga and tai chi class.

At the end of each class, the Elite Animation students laid out their sketches at the front of the studio for everyone to see.

“It was fun to see myself in a drawing,” Paz said.

For many of the art students, the experience drawing a live fitness class was invaluable.

“For an artist, you learn how human anatomy overlaps in shapes,” said Brandon Burghard.

There is already talk of making the classes a regular part of the fitness studio’s schedule.

“It will be neat if we continue this down the line,” Betta said. “If it’s successful, we’ll definitely do it again.” 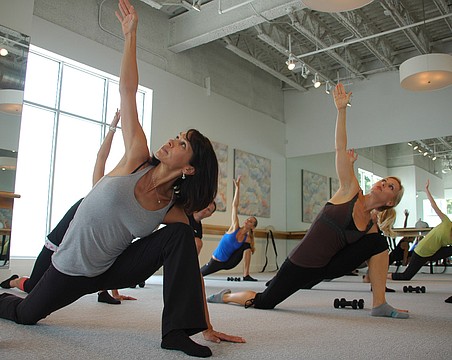 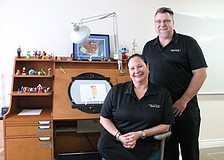 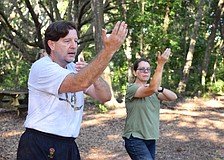 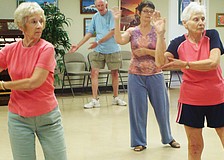