The First Academy Royals find success in the details

Being sound in every aspect of the game has come a long way for the Royals this year.

The Royals will host the Foundation Academy Lions at 7 p.m. Friday, Oct. 21.

For The First Academy football team, continuity is key.

“People understand what we are doing every year,” head football coach Leroy Kinard said. “You’ve got kids in our program (who) may have been running the same offense ever since they’ve been in the seventh grade, so by the time that kid is a sophomore or a junior, he’s been running for four years.”

However, this year specifically, the Royals have focused on accuracy — doing the little things right.

“What we try to do is we try to make sure that we are sound everywhere,” Kinard said. “In the past, when we were like, ‘Don’t worry about that little thing’; now, we have to worry about that little thing because we see a deficit in the area so what we have to do is make sure that we are sound in every area.”

As a result, the Royals have taken a restructuring approach this year— including a complete new coaching staff — and a more in-depth examination of the program.

“We’ve really had to take a look at our entire organization and team,” Kinard said. “It’s time to just start over. … I believe this is going to sharpen us and make us better.”

The Royals also have taken advantage of a roster chock full of intelligent players.

“We have a number of guys very similar (who) understand how to play the game,” Kinard said. “Sometimes, because you have smart players, it can compensate for a step, because they know what they are going to do. They watch film, and they pick up a tendency. … So what (these players) are able to do is they are able to pick up on those little nuances that a lot of people may not see, and it helps with evaluation of the play.”

It’s worked. The Royals have raced out to a 6-1 record and have outscored their previous two opponents (Trinity Prep and Florida A&M) by a combined score of 78-6.

This year, the team has one of the largest senior classes (11) it has had in many years. Many have played together since they were in fourth grade.

One of those seniors is quarterback James McGinn, 18. The team captain has been playing football for the Royals since he was in fourth grade — except for his sophomore year, when he played at Foundation for the season.

“What’s different this year is that everyone is on the same page,” he said. “We all have the same goal in mind and that’s the benefit of the team and to push ourselves deep into the playoffs.”

“Two biggest things about quarterback are leadership and accuracy, and (McGinn) has both,” Kinard said. “Because he has both, that’s another thing that’s allowed us to have success.”

The winner of Friday’s game will earn a trip to the playoffs.

“That’s interesting,” Kinard said. “I think we both have similar teams, and I think we are both at a similar point, so it’s going to be interesting. … I wouldn’t put it in a rivalry category, but obviously, anytime you have to beat someone to go into the playoffs, it’s going to ramp it up a little bit. That’s just the nature of it. We think it’s going to be a pretty even game.”

“I’m extremely excited, and I think it means a lot, because the winner of this game makes the playoffs,” he said of facing his former team. “We are going to bring the game to them. I don’t think we are going to wait and let them dictate the game. I think, defensively at least, we are going to dictate how the momentum and the flow is going to go.”

During practice and every day of the week, the Royals not only learn about football and academics but also about the spiritual component of life.

“We want to make sure that we help these guys understand what it really means to be a godly husband and a godly father; that’s important to us,” Kinard said. “We call it the third leg of the stool. … We feel like that is one of the things we are going to do whether we win games or not; that’s probably the No. 1 thing that we do here.” 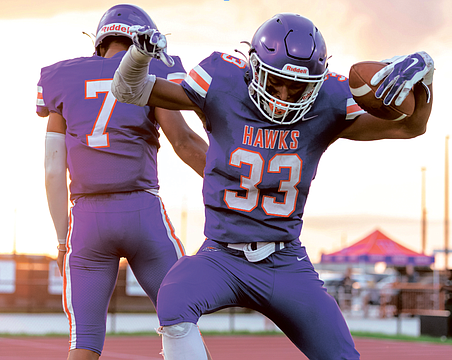 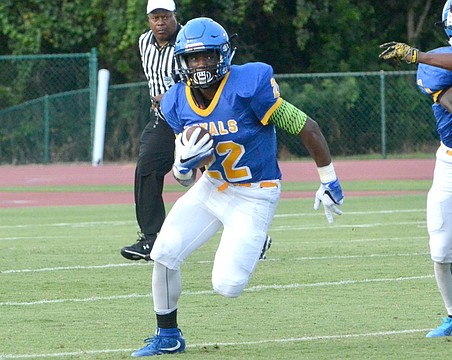 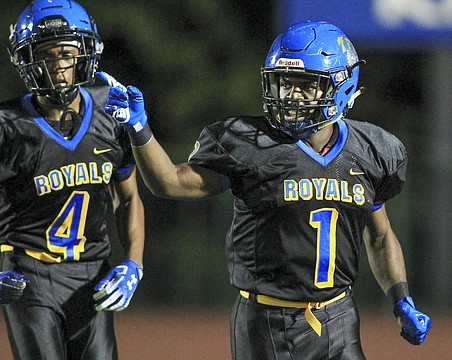 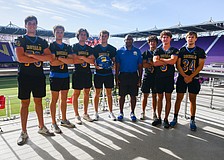 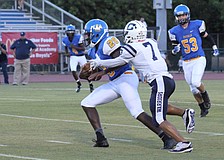 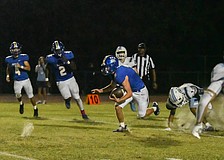 TFA offense leads the way to the playoffs 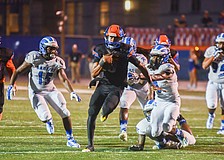 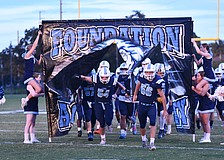